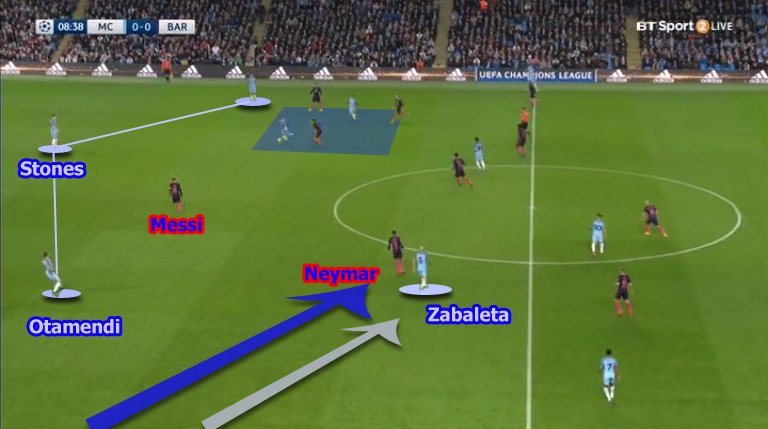 Despite stubbornly defending his way, Guardiola finally seemed to take a step back from his possession game and went for more pragmatic approach which was instantly rewarded with a win over his former club. Although City employed different approach against Barcelona, compared to the match played last week at Camp Nou, the match flow was quite similar. Barcelona went one up from the first shot on goal despite City being quite successful at closing them down.

1. ABANDONING POSSESSION AND PLAY OUT OF THE BACK MANTRA

Without his sweeper keeper, Claudio Bravo, Pep maybe didn’t want but simply had to abandon his desire to control the possession. That was the first step towards the change of strategy compared to match at Camp Nou. Playing with less skill full goalkeeper meant City can not keep the ball at the back against Barcelona pressing and led to much simpler game plan. The way Guardiola wanted to play at home, compared to the away match, is maybe best seen in clearances department. While City was reluctant to clear the ball at Camp Nou (only 15 clearances), at home ground they went for a long punt 25 times. Not allowing easy goals seemed to be the goal for Guardiola.

Above you see the passing map for both City goalkeepers in the first and second match. While Claudio Bravo was able to get to 70 per cent pass completion rate, Willy Caballero had only 37 per cent. No doubt Bravo helped City keep the possession and control the match as Guardiola wants, it also meant that a red card Bravo received was a direct consequence of game plan.

With Caballero between the sticks City opted to clear the ball much more frequently giving the possession away but keeping nice and tidy at the back avoiding crucial mistakes close to his own goal.

As a consequence of this shift in approach, City had only 35 per cent of the ball at home ground while at Camp Nou they were only three per cent behind the best passing team in the world.

Above you see a characteristic movement from Zabaleta who cuts inside from right back position. This forces his marker Neymar make decision. Does he go and track Zabaleta inside? In this instance he does and leaves Messi alone to cover Stones and Otamendi.

Although Barcelona generally does well when pressing in numbers on the small space, above you see importance of Zabaleta’s positioning whenever the ball is on the left side of the pitch during the transition into the middle third. As Fernandinho manages to break the pressing Neymar remains in no man’s land and Zabaleta is alone with enough time and space to go for a direct ball behind high defensive line.

Although Zabaleta was important in breaking down Barcelona pressing and an option if Neymar wasn’t careful, City didn’t make much of it. They were most dangerous when they didn’t have the ball. Their positioning without the ball was formidable throughout the match. City managed 21 interceptions compared to only 10 of their opposition. However, it is even more important when they made the bulk of them. Two thirds of those balls City managed to get in middle third of the match between 30th and 75th minute. During the same period of the game Barcelona managed to intercept only four balls. To remind you, they had scored in 39th, 51st and 74th minute of the match while the first goal was direct product of work without the ball.

To conclude, it could be safely said that Guardiola went very pragmatic with his approach to the match. He kept what went well in the first game (pressing) and abandoned what wasn’t good. Once Claudio Bravo was banned for the match Guardiola had no possibility to go and win the possession game against his former team. He opted for direct game mostly over the right wing while waiting for runs from deep by De Bruyne and Silva once he managed to catch Barcelona on counter attack. Barcelona played same as they did at home and couldn’t produce much. Once City cut down on their own mistakes they went and won the game pretty much the same way they lost it last time around.