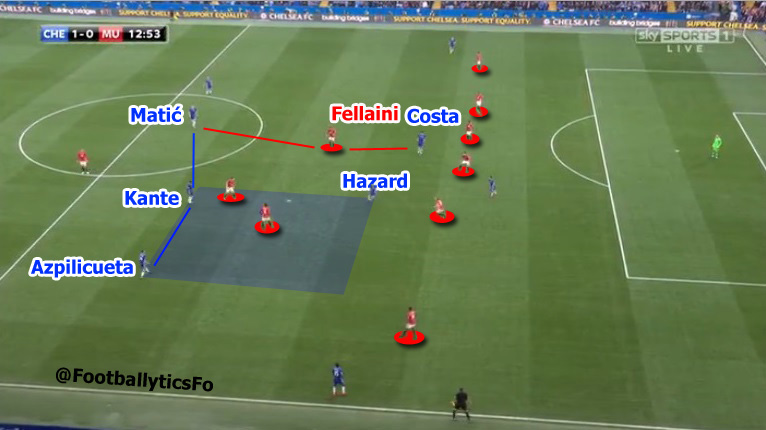 A lacklustre performance from Man United helped Chelsea to a high scoring win while Jose Mourinho made one key mistake even before the game. Although the way United played would sooner or later provide opportunities for hosts, rather strange goal opened the match steering it into one direction.
Encouraged by the win in Europa League and very sound performance against Liverpool, Mourinho went to Stamford Bridge ready for yet another defensive minded match. He essentially tried to emulate the defensive performance from last week. However, while 6-3-1 worked very well against Scousers, it was doomed when it faced Conte’s team.

Above you see United (blue shirts) in their defensive shape against Liverpool. Main reason this worked so well is due to nature of Klopp’s team. Full backs Clyne and Milner are designated to provide width while Mane, Firmino and Sturridge are all staggered in central areas. That is not so different to Chelsea front three, although Hazard has more liberty in his movement than Firmino as the latter usually doesn’t interfere in Mane’s space.

Compared to Liverpool, Chelsea players are occupying better positions to deal with Mourinho’s defensive block. While wing backs, Moses and Alonso, are in same positions as Clyne and Milner, it is the midfield that is making the difference.

Above is the passing and positional map of Liverpool and Chelsea playing against Man United. Liverpool was whole match trying to pass the ball quickly to Firmino who would then get caught in the traffic (lost 21 balls, double than any other player in the match). Both advanced midfielders, Can and Coutinho, were very high up the pitch and struggled to get control of the game. The third man, Henderson, remained behind them in holding position.

Chelsea, on the other hand, did things differently. Azpilicueta and (occasionally) Cahill were joining Kante and Matić in the middle from defensive line. This move created numerical parity in the centre of the pitch. Crucial thing happened when the ball switched to left or right. Deep and flat position of three men in midfield (unlike Can-Henderson-Coutinho triangle) created pockets of 3v2 situations in half spaces. While Manchester United might have been rather unlucky to concede after few seconds and then from corner, those 3v2 situations really killed them off.

In the second half Mourinho switched to 4-4-2 as Fellaini was dropped for Juan Mata. This didn’t really influence their approach in attack. As in the first half, United was often found overloading left side and then shifting the ball to Valencia on the right wing for a cross. Although he provided few good crosses targeting rather short Azpilicueta, nothing came of it. Their defensive plan failed to cope with three deep central midfielders as well. In fact, it was these situations that created last two goals Conte’s team scored.

Above we see the 62nd minute and nice 3v2 overload on the left side. Mata and Herrera naively follow first pass from Hazard to Kante and then for Matić. This creates space to exploit for Hazard* and Chelsea was three nil up effectively sealing the game off.

Ten minutes haven’t passed and same situation occurs in the right half space. Three quick passes from Kante to Azpilicueta and Pedro (not Hazard as the frame wrongly says)** pull out of shape Pogba and Blind while last pass from Pedro back to Kante creates space for Kante to exploit. Yet another 3v2 that unlocked unprepared United defence. It is rare occasion to see basic stuff from training pitch that works so well and consistently during a competitive match.

To conclude, encouraged by good defensive performance against Liverpool, Mourinho went to Stamford Bridge hoping to repeat the result. However, he failed to adapt his defence to Chelsea’s offensive style and paid dearly. Even if Chelsea didn’t score that early goal and corner, lack of attention to Conte’s midfield would catch him sooner or later. Inability to adapt the defence to that midfield three was crucial to the result. It will be interesting to see how Mourinho reacts to this heavy defeat in two days when he plays the derby against Guardiola. Chelsea will, on the other hand, find new belief in their manager and his ideas after such a comfortable win. A crucial thing in a long journey of creating a bond and trust between the players and the manager.

*and ** – thanks to Sarcasmatican from reddit football tactics community for rectifying these two mistakes!

One thought on “Mistakes Mourinho made against Conte, Chelsea v Man Utd analysis”