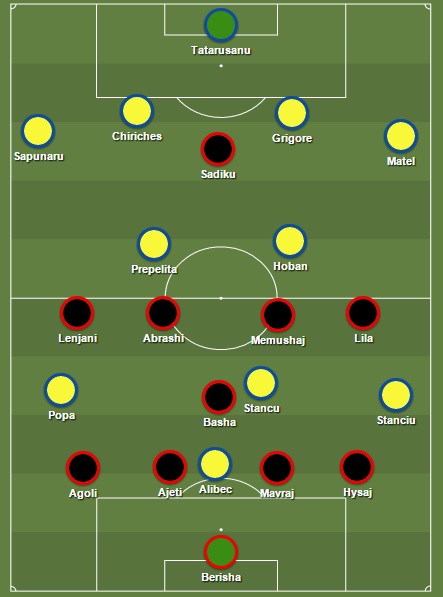 Sometimes you will hear people saying there are those big, must see, matches and then you have the rest. I really don’t think that is a valid point, although I do understand “smaller” teams aren’t as attractive to wide football masses as are powerhouses who always play to win the tournaments. Match between Albania and Romania is surely seen as a “small” match not really worth the “proper” attention but it is a finest example of a match that will go into football history books in Albania. So that can’t really be a small match, can it? Besides, this game gave us perfect opportunity how, normally neglected, throw in routines can be decisive for a football match. Before the game both teams needed a win to have a chance of reaching the knock-out stage and both set up as expected. Romania was a favourite to win the game so they went out with an idea to hold the ball and control the match. Not surprisingly,

Gianni  De Biasi sent his team of The Eagles on the field with the same game plan they had in previous two games. Very disciplined in defence and even faster and more decisive going for counter-attack. First half kicked off with above premisses, and Romania found itself with problems in possession immediately. Confronted with very disciplined Albanian defensive formation, they had too few players in the opposition half that were covered without problems. As Hoban and Prepelita  dropped to pick up the ball they were left with only five players in the opposition half and their game plan of controlling the match was undone right there. Albanian defence did good job, but unwillingness to push fullbacks further up the pitch was crucial for ineffectiveness for Romania and their loss of control.
You can see on the above screenshot how much space fullbacks have to receive the ball. However, even when they did receive it, they seldom sought to overlap and add the numbers in the offensive third. The picture that tells even more is the passing overlay of two Romanian fullbacks. They both finish their involvement in the game about 35 yards from the goal line. To make it worst their combined stats for take ons and crosses stops at two! One cross (that didn’t connect) from Sapunaru and one take-on from Matel. That is their whole offensive work. So how does that relate to their game play?
As they are firmly closed in the middle having numerical disadvantage  (usually Prepelita dropped deep to pick the ball from centre backs), all they can do are long diagonal, or direct, balls into the lap of Albanian defence. In the end they finished with 34 of those long passes of which only third connected and none in any dangerous area. In other words – Albania completely owned them and did what they do – counter. Just as Romania, Albania repeatedly searched long direct balls once they had won it back, usually in the middle. However, it was against disorganized defence.  They were incisive, changing point of attack and, as the rule says, within 5 to 10 seconds they were either in front of opposition goal or given the possession away, usually as Sadiku was caught off side.
However, their best opportunity came not after the counter but as Lenjani and Abrashi

outplay the opposition on the left in 23rd minute.

Quick passes caught their opposition completely out of shape and Sadiku finds himself with plenty of space and time to passes into for Lila. It all ends with far post cross that Lenjani who isn’t able to convert on open goal.

Even if Albania was really good on counter, what really changed the game were swiftly executed throw-ins. It is such a neglected aspect of play that most statistics don’t even include number of throw-ins. Yet, Albania managed to execute four of those on right flank. Three of them caught the opposition unprepared and finished with the shot on goal. One of this came in 43rd minute and decided the game.

By the end of the first half Albania had better idea what to do on the pitch, they defended really well waiting to rob the ball and quickly transition to attack with direct passing. If they were technically more gifted bunch they would be even more dangerous as a lot of those balls ended out of play since the pass or the first touch were inaccurate. Then again, if they were indeed technically better, they would probably seek more possession and had a different game plan.

Slowness and ineffectiveness in offensive phase was dully noted by Romanian manager Angehel Iordanescu who decided to act immediately at half time. Prepelita was substituted with Sanmartean who looked more decisive on the ball. He was keen to take on the opposition surging forward like Ivan Rakitic does in Croatian national team, and he looked for more short, precise passes forward. However, despite higher work rate, more movement in the final third Romania never seemed to believe they can change anything.

From Albanian point of view nothing really changed in the second half. They continued business as usual and secured the historic first victory in EURO. In the end, two things decided the game.

A magic force field around the Albanian box is one. A true monument to their defesive work as not a single pass penetrates inside, as you can see above. The second was general idea of direct counter attacking game but particularly a small neglected part that De Biasi won’t be commended for, despite it is precisely his brilliance that brought victory, by instructing the players (Hysaj above everyone) to take quick throw-ins when needed.

On other hand, Iordanescu failed to risk by pushing forward the full back losing the opportunity to potentially unbalance the opposition defence. More aggressive movement and forward play in second half wasn’t enough against well organized Eagles defence.